So, today, Juel walks in, sees the object in the picture below: 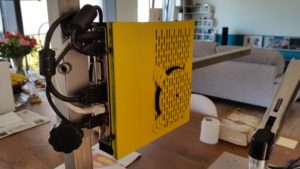 and asks “What the crap is THAT?? And what does it do??”. Without missing a beat, I put on this song, and this one at the same time, and type the following, 100% true conversation:

that is mad max,.

the fan was one mm too high for the case,.
this is how we solved it.

let me tell you.

the specs were set by a hungarian engineer who flew here twice to design and build it.
the unit was assembled with an on site consultory supervision by the md of cloud computing of a huge bank in the us
i also had him hang up shelves.
there was another guy who also made a shelf but we ended up not using it.
the cutout of the top was done by a professional steelworker, who misunderstood our request and used !a drill instead of a plasma cutter.
i know
that would have been so! cool!
imma post this as a blog btw
ok.
then
the elevation was designed by a ph.d. in physics who spends his days looking for nanometers
nottomention, the invaluable support from his polish girlfriend
and her mother
and her daughter
the ph.d. also did the first coat of paint
then, my sister flew in from new zealand
to alternate between sanding and spraying for three days straight
that is one hundred layers of yellow paint, my dear.
could you grab my phone from the study and make some cute pics of the thing?
ok!
ill continue.
so.
the mount was made by a professional welder who screwed the screwholes the wrong way around
luckily we werent screwed, paul found a way around it.
then
last night
my best friend paul put it all together
including ups
because zoe has learned the unplugthepowercord trick

to answer your question, what it is
it boots in eight seconds
it runs windows ten
it has one of the fastest i5’s on the market
runs on literally half the power of a lightbulb
and it
never
ever
makes me wait.

still
the cpu in Iris’ macbook has just a teensy bit of a higher score on passmark.